I bought next year’s garlic at the RHS’s Malvern Autumn Show a couple of weeks’ ago. This is the first chance I’ve had to get them sown.

I sow different varieties each year in the faint hope that I’ll be able to find one that’s outstanding – head and shoulders above the rest in flavour or size and so well suited to our conditions that it becomes the choice forever after.

But the simple truth is that they all seem to do really well here.

This year I’m trying Provence Wight and Solent Wight – both of which I have grown before – and two that are new to me – Carcassonne Wight and Bohemian Rose. 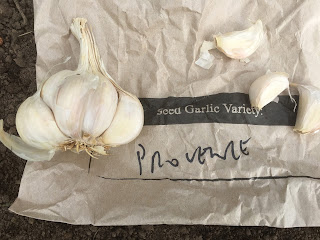 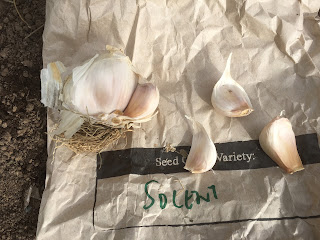 The first two are softnecked varieties and the last two hardnecks. The two classifications quite literally refer to the neck of the bulb which, when dried for storage, are either rigid (hardnecks) or flexible (softnecks). 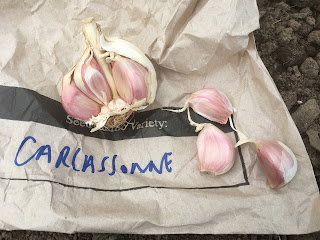 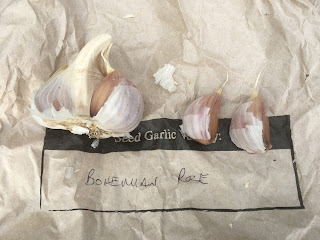 Sowing them is dead easy: Make sure the bulbs are broken up into individual cloves. Then you just make a hole with a dibber, drop the clove in and fill the holes in.

There are couple of key points for those who haven’t grown garlic before though. First of all, don’t peel the skin off the cloves. Then make sure the cloves are the right way up with the root plate at the bottom. The wisp of skin at the top of the clove should just be sticking up out of the ground.

The second key point is to avoid using the clove itself to make a hole – though it can be tempting to do so. By pushing the root plate through the soil you could damage it and let infection in.

Cloves are normally sown six inches apart but it’s worth giving enough space around them so that you can weed with an onion hoe.

Once they are in, you need to make sure they don’t dry out and, in South Wales over autumn and winter, that is unlikely. They are hardy and capable of withstanding hard frosts.

The only other problem they are likely to face at this stage is birds, or more precisely, blackbirds. They seem to have it engrained into their behaviour to pull up any wisps of vegetation that are left poking above the ground. Perhaps thy think this may be a piece of leaf litter dragged into the soil by earthworms.

Whatever the reason, I can almost guarantee that the numerous blackbirds in the garden will pull up several cloves before they root and shoot and I will have to reposition them. I’ve built it into my routine for the next three or four weeks to check the bed daily.

And here it helps to have cloves that – at least at this stage – look different from each other so that I know where to replace them.

They’ll shoot fairly quickly – most probably in two or three weeks – and be ready to harvest in July or August.