Since finding the impressive cauliflower mushrooms in the woods on the northern ridge of the Rhymney Valley, I have to dutifully record another fungal find – a couple of small patches of chanterelles or Cantharellus cibarius. 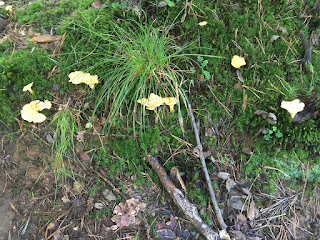 These first appeared in the dying days of August though I left them for a couple of days before harvesting them as they were too small and too few to make much of meal. It was a risky strategy but it paid off and five days later I picked about a dozen significantly larger specimens.

To some, they are the most prized of British mushrooms but you have to distinguish them from the false chanterelle.

Both are relatively small – up to about 9cm across the cap – with short, often-bent stems and range from bright yellow to orange. The caps flatten out as they get older then turn upwards and flute around the rim. They grow on mossy banks, often close to conifers as mine were.

The best guide books agree the most clearly distinguishing feature between the two types are the gills. In the chanterelle, these are called false gills and are like shallow veins, branching and relatively spaced apart. In the false chanterelle they are much more closely packed and finer.

I was thankful to be able to judge them on this with confidence because several other traits used to distinguish them seem to be of little use.

Cantharellus cibarius is said to have a faint apricot smell – but not is you have a late summer cold and a bunged up nose.

The colour was one cited in most books – the chanterelle being more yellow than the orange false chanterelle. But in the very same books the accompanying photographs showed them to be of almost exactly the same colour. I guess this trait varies significantly, as does the consistency of book printing processes. 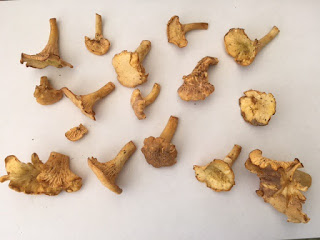 And I can testify that they turn a more generic beige as they dry. Mine have just finished drying but still only look like a mouthful, so I’m saving them in the hope that I‘ll find a few more before the season is out.

In the woods above us, on the ridge between the Rhymney and Sirhowy Valleys, I had been exploring for many moons too.

Here, a couple of years ago, I found an example of the extraordinary cauliflower fungus – Sparassis crispa. It was too old to eat – still firm of flesh but a little manky and potentially maggoty.

Helpfully, the cauliflower fungus fruits in the same place year after year. And this year I finally found a fresh one in exactly the same spot.

They’re very easy to identify because there is nothing else quite like it. It was the size of a bath sponge and indeed looked more like the sort of large, natural sponges we’d seen on sale on our Greek island than a mushroom. And it smelled … well, mushroomy (mental note: try and find better ways to describe mushroom smells). So, anyway, I harvested it.

Cleaning the beast wasn’t easy. It is full of holes which make perfect hiding places for little beasties from the forest floor but I resisted the temptation to wash it, as advised in a couple of mushroom guide books.

Instead, I gave it a good shake and dabbed around hopefully with a damp cloth. It was fresh and quite sturdy so didn’t break. I hoped I'd rid it of most of its occupants. 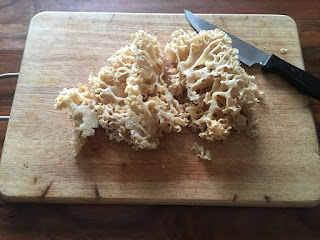 I cut three slices – about half an inch thick – laterally across it with a bread knife. The flesh was quite flexible but almost brittle so it still held its shape apart from a couple of loose pieces that became separated.

Then, I simply fried it gently in some olive oil. There were recipes for it but I wouldn’t to understand exactly what it tasted like, so I just ate it on buttered toast.

Sparassis crispa had a surprisingly mild mushroom flavour and firm texture. Pleasant, but not stunning. The best part of the experience was finding it. I’ve actually found another one in the last few days too, but this specimen was, once more, too old to eat.

The remains of the one I did harvest – about half the fruiting body – have since been dried in a paper bag hanging in our Grecianesque conservatory. I’ll try them in a different recipe later this autumn.

'If you build it, they will come' ... well, I built my dreams up when it came to field mushrooms this year, only to have them crash down around my head.

It was always going to be a risk as we were away on holiday for two weeks of guaranteed Greek summer sunshine at the start of August.

Back home, our first holiday week – from the last few days of July – was wet. The second, however, was dry and when we returned I went out mushroom hunting at the earliest opportunity, August 11th.

The meadow below us on the side of the valley, where the soil has probably remained undisturbed for decades, usually bears a bumper crop of field mushrooms. Two years ago I was able to collect as much as a kilo in one day.

Last year, however, the field was left ungrazed all summer and the grass was too long to collect mushrooms. So my hopes were raised for this season as I had a point to prove.

However, a grand total of nothing on the 11th was matched by a similar result on the 12th, the 14th and then every other day as my faithful companion and I searched in vain. Mushroom hunting – in this field at least – had turned in to simple dog walking.

Finally, on August 28th – a couple of days after some heavy rain – we found three. Followed by two more the following day. Then, after a few more fruitless days we gave up for the year.

I suspect that we missed the harvest while we were in Greece. It’s usually around the second and third weeks of August on this side of the valley but perhaps this year it was early.

However, all was not lost.