Bounty for birds this beautiful autumn

It’s been a beautiful day in South Wales with temperatures in our patch as high as 19oC in the early afternoon – exceptional for the last day of October and the wildlife came out in force to enjoy it too.

Although it’s been colder in the last week, that’s only been because the fog from the Severn Estuary has been rising and drifting up over the South Wales Valleys. But the weather forecasters, who said the warm weather was over, got it wrong.

So off I went up onto Mynydd y Grug to enjoy the sunshine. And it was glorious. 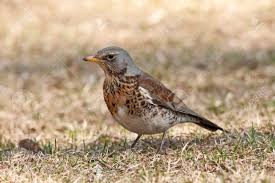 Flocks of fieldfares (left) and redwings (below) – mainly winter visitors from Northern Europe – were tucking into the bumper crop of berries the ubiquitous hawthorns are bearing this year. Quite a few blackbirds were gorging themselves too. They’re probably natives nesting in the vicinity and don’t need to hang out in the flock of visitors.

While the dry spell, with hardly any wind, is set to continue in the week ahead, it now promises to be very sunny with the fog being held at bay. And today was the start of it. 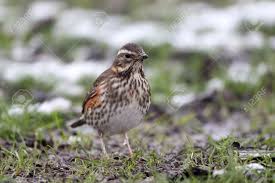 Further down the valley side, squirrels have moved onto the haws on Cwm the lane below Stonecroft, having finished the hazelnuts by the first week of October. Now every few yards a splatter of small red berries litters the lane, marking each overhanging hawthorn tree.

Back on Mynydd y Grug, there were a few wheatears around though not as many as I saw last winter. The goldfinches are flocking together further east along the ridge between the Rhymney and Sirhowy Valleys. They seem to favour a stand of beach trees surrounded by sheep pastures.

A couple of ravens tumbled in the sky and three buzzards had found a thermal above the south-facing slope of the valley. I didn’t see any red kites today but they’ve been around increasingly frequently. 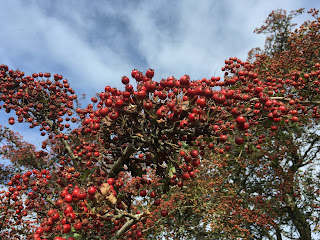 A field used for grazing by dairy cattle at the top of the valley has recently been ploughed and reseeded with grass. This has acted as an invitation to crows, ravens, buzzards and red kites to come and snack ... on earth worms.

It’s not what you normally associate with these birds eating but think of it as birds’ convenience food – a tube of protein or the avian equivalent of a pot noodle.