As well as the garlic, I also got the onion sets in today. I usually grow two red varieties: Electric and Red Baron.

Electric are started off in autumn. They grow to well over 1lb each and have a good flavour. But they are thin skinned and don’t store well. So they need to be used up fairly soon – certainly by Christmas.

Red Baron on the other hand, are almost the polar opposite. They don’t get planted until February but are thick skinned and store well.

Like Electric, they have good flavour and can be used cooked or raw in salads. And that brings me to the main reason I grow red onions: it is to use them in Greek Salad, which is one of our staple meals … but not in the winter.

So do I need a variety like Red Baron that stores well into the new year?

Well, they never go to waste. We cook onions all the year around but they are also cheap enough to buy. But the problem I have with Red Baron is I can never grow them big enough. They’re nearer ping-pong balls than tennis balls. So this year I’m just growing for Electric. 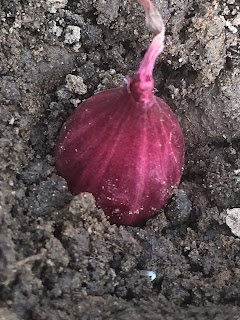 The sowing process is the same as for the garlic … dibber, hole and job done. Bear in mind the onions do grow big – expect one or two to get more than six inches across – so give them plenty of room. I allowed about eight inches between sets.

I normally buy the sets by weight – 250g would give me around 120 sets. Make sure there are no rotten ones. Any that are soft are unlikely to grow too. I sowed 72 in a 9x8 grid, starting with the biggest and firmest. Those that are left will be fine but someone else can have them.

They’re in the same bed as the garlic. The last few feet of the bed will be used for shallots. I haven’t bought them yet but there are plenty of varieties to choose from and they too have a good track record at Stonecroft.
Posted by Simon at 2:34 PM