Having enjoyed my field mushrooms I decided to see what other mycological marvels – edible and not – I could find.

Fields and meadows aren’t the best places to search. The woods above us are more productive. Not only do they provide a more varied habitat but many fungi grow in close association with trees.

Many are commensalists – living in a mutually beneficial relationship with trees. Others are parasites growing at their hosts’ expense. And more still are saprophytic, living on dead wood. Some only grow in association with specific species of tree and others are less selective.

Mushrooms are the fruiting bodies of the fungi, their job being to disperse microscopic spores that help spread the species.

Most people associate them with the autumn but different species grow at different times of the year.

That said, late summer and early autumn is the prime season for a productive fungal foray. Here are some of the species I’ve found around us and tentatively identified. 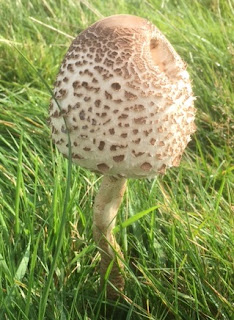 The Parasol Macrolepiota procera (above) is edible although I didn't try this one. Firstly, I wasn't convinced enough by my identification at the time of finding it and it was the only one I found at the time, so not much of a meal.

And where I found this one on rough pasture on the ridge between the Rhymney Valley and Sirhowy Valley in August, I found more in September. 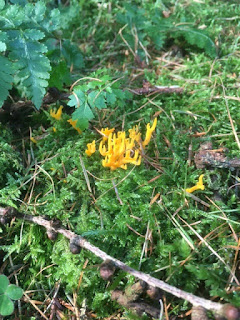 This one, however, I could not identify properly. It looks like coral, stands up to about 5cm tall and appears to grow from soil through grass and moss in a damp, mainly coniferous wood above the Rhymney Valley in early September.

It looks like the common and widespread Jelly antler fungus Calocera viscosa but with longer branches than I could see in teh pictures I found of it. Or could it be one of the other Coral fungi, perhaps one of the large Ramaria genus or the Clavulina genus?

Whatever it is, it stands out because of its bright yellow colour. 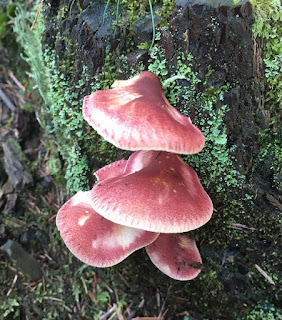 This mushroom, growing on the side of a tree trunk, was a real beauty - but what is it? The cap really was very a vibrant maroon and about 12cm across. 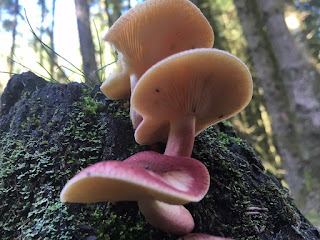 Underneath, the gills and stems are white. And you can see from this angle, it's not a bracket fungus but growing on a true stem.

I found it, along with others on this page, in the coniferous wood at the top of the valley in late August. Any ideas?

But this specimen below was growing on the forest floor. And I could not find anything reliably like it in guide books 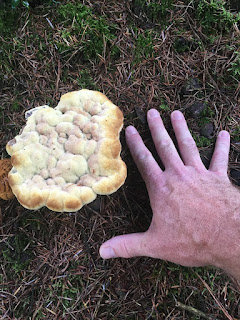 Again, all ideas are welcome.