It's a very busy time of year but with the great weather we've had over the last seven days, you've got to take time out to smell the roses - to enjoy the good life.

This spring we built a large pond, about 39 feet by 20 feet and up to 4 feet deep. It's going to be a wildlife pond but I need more oxygenating plants in it - at the moment it's a bit green - but that will come. I'll try and get it sorted out this winter.

However, the wildlife is already arriving with all sorts of insects in and around the pond, and the most spectacular of all are the dragonflies. 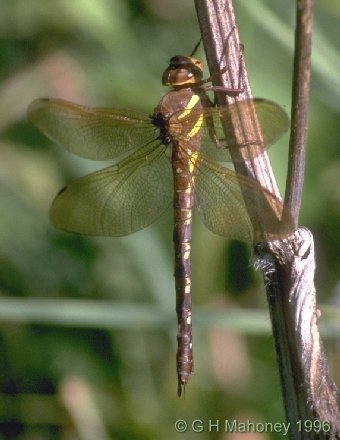 The Brown hawker (Aeshna grandis) is almost as large. The female is brown with cream slashes along the side of its thorax and abdomen.

And the Common hawker (Aeshna juncea) is similar but the slashes are light green.

All three have been around almost every day (apart from the wettest) over the summer - but I've never seen more than one at once. They fly up and down patrolling an area that extends over the pond, under a large oak tree, around some grassland and into the orchard.

The fourth was a species I haven't yet identified. It's one of the reddy-orange abdomed Darters (the Sympetrum genus) and it was around in the same parts of the garden earlier this summer for several weeks.

There are plenty of insects for them to prey on, especially under the oak tree. They do fly over the bee hives too and are said to eat bees, though I've never witnessed it. Tonight I saw the Brown hawker catch a crane fly in mid-air, then carry it off to eat. They're welcome to them!

I'll try and take some photos as the opportunity arises but it's tricky - they need to be settled, and dragonflies, more than damselflies, fly for long periods without resting. Add to that, it's late in the season, so it may have to wait until next summer.

So I've added some images I've picked up from the web. Altogether ... Oooh! They are (top to bottom) the Emperor dragonfly (Anax imperator), the Brown hawker (Aeshna grandis) and the Common hawker (Aeshna juncea), which actually looks a bit greener than this photo - take my word for it.
Posted by Simon at 12:49 PM